In the early 1970's prior to formation of the Filipino American Association of Santa Clarita Valley (FILAMSCV), a small group of Filipino American "pioneers" from different sector of Santa Clarita Valley, got together and began organizing summer picnics and potluck Christmas parties. In the early 1980's the group started growing and they decided to unite as a family and social organization, be active in the community and be recognized in the growing Santa Clarita Valley.
In January 1984 FILAMSCV was formally organized by creating a governing body, which set forth the fundamental laws of the organization and the nine members of the Board of Directors were elected by the membership. The Board's primary function was to plan and execute various projects and activities of the association, and to carry out these projects several committees was created including Social, Cultural, Civic, Recreational, and Membership.
By-laws was drafted and ratified which became the basis of the association's operation. In 1985 after a careful and thorough research by the Board, FILAMSCV was incorporated as a non-profit mutual benefit corporation in the State of California.
Bayanihan spirit was always the driving force behind the association as evidenced by the success of every undertaking year after year. The success, accomplishments and achievements of the association each year, depended on the President and the Board, under their own unique leadership and teamwork. Since families are the central unit of the association, various family oriented activities are planned each year including Easter picnic, camping, cultural events, bowling tournaments and Christmas parties. FILAMSCV's activities are opportunities for the group to come together and reveal in the success of the worthwhile projects and events.
Young people are one of the most important elements of the association. Youth group activities first started in 1986 when the teens and the parents realized that there are number of active and motivated teenagers who wanted to get involved with FILAMSCV. The associationbelieves in molding the next generation into a responsible, law abiding and community oriented citizens. Their involvement made them aware of the Filipino heritage and culture and instilled Filipino-American values and pride.
Recognizing the importance of the youth and the next generation, FILAMSCV approved the Scholarship program in 1986, to recognize and provide financial support to deserving and graduating high school students in Santa Clarita Valley and in the Philippines. Today, the Scholarship programin one of the most important annual projects of the association.

Time never stops and changes are inevitable for any evolving entity, and FILAMSCV is no exception. In 2009, FILAMSCV took another step forward and became California non-profit public benefit corporation and changes its name to Fil-Am Association of SCV, Inc.
Last year, FILAMSCV recieved final approval from federal and state governments to be a tax-exempt, non-profit organization under Section 501(c)(3) of the Internal Revenue Code. This means the association will be able to sponsor and engage in various charitable and humanitarian projects for the well being of the community. We will be able to recieve or accept tax deductible donations from our sponsors and benefactors for any amount they could afford to offer.
The association has evolved and grown over the last 30 years, garnering accolades, recognition, and support from the City of Santa Clarita. The children of the founding members have grown up along with the association, and some of them have brought the next generation of FILAMSCV members into the world. Let us hope that this cycle continues and that the association thrives in another 30 years and beyond, upholding the legacy of the Fil-Am Association of SCV, Inc.

Why you should join Fil-Am of SCV? 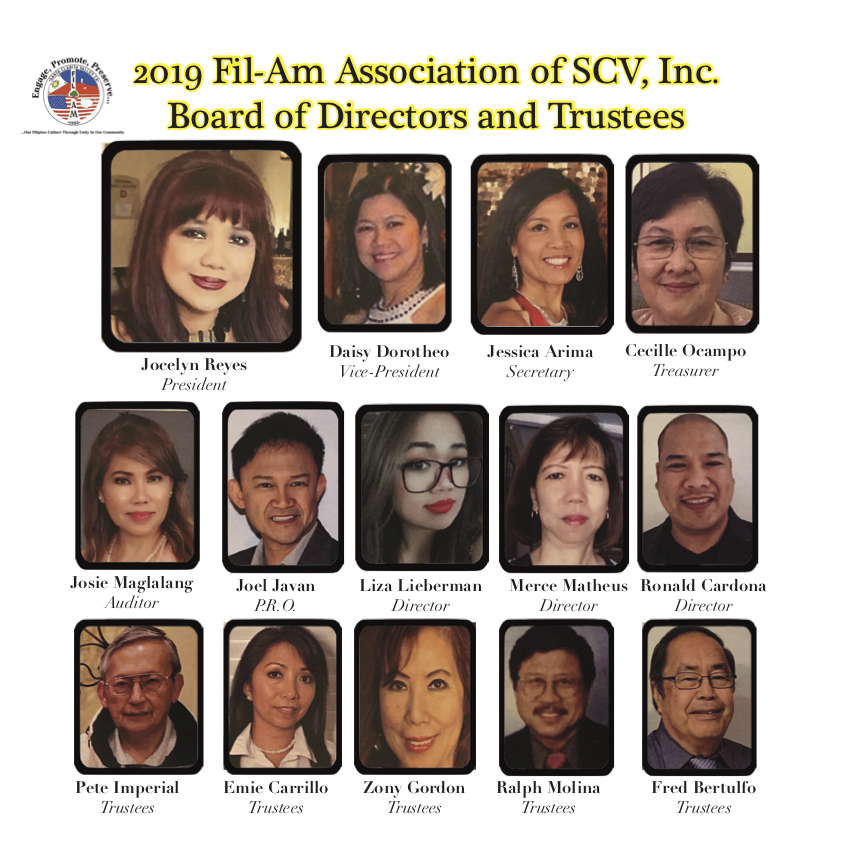 CONTACT US:
Monday- Friday 10:00am - 5:00pm
Email: info@filamofscv.org
Thank you! Your submission has been received!
Oops! Something went wrong while submitting the form
Fil-Am Association of Santa Clarita Valley, Inc.
Serving Filipino-American Community in the City of Santa Clarita Valley
P.O. Box 801753 Valencia, C.A. 91380
FAQ     Contact Us     Sign Up
designed by: LiLdeZign